Difference between revisions of "ID Module"

The ID Module is a deprecated part of the Chordata system. It was used during prototyping to set the value of the address translator of the K-Ceptors, allowing them to coexist in the same branch by setting different translation values to each one.

Starting from the K-Ceptor R2.2 the resistors that were on the ID module can be soldered directly to the board

Many of the concepts on this page still significant for a better understanding on how the Chordata system works. 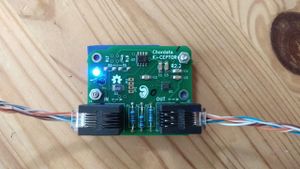 A current version of the K-Ceptor. An ID_module can still be used, but the recommended way of assigning the translation value is to solder the resistors directly to it.

Every K-Ceptor should get a unique translation value within its branch. It should be set in hardware with just a few components, see the end of this article for more details. Having those components soldered directly on the K-Ceptor would reduce the overall ability of the system to create arbitrary hierarchies. Making those values configurable directly on the K-Ceptor would make that unit bulkier or more complex. Instead the ID module allows a flexible configuration of the translation value without adding much complexity to the system.

While what stated on the last paragraph is true, the ID_module itself with the connector resulted on an overly bulkier appendix to the K-Ceptor. And it was sometimes responsible of false contacts that resulted on misconfigurations of the translation value, or even failures of the complete K-Ceptor.

The ID module has to be attached to the J5 connector of a K-Ceptor. The recommended procedure is to attach all the K-Ceptors to the performer's body, and then distribute the ID modules to match the hierarchy that you are attempting to capture. For example for the Default Biped Configuration the ID module are distributed as in the following scheme

The ID_Module is not used anymore. To capture with the Default Biped Configuration you should arrange the K-Ceptors as in the image below 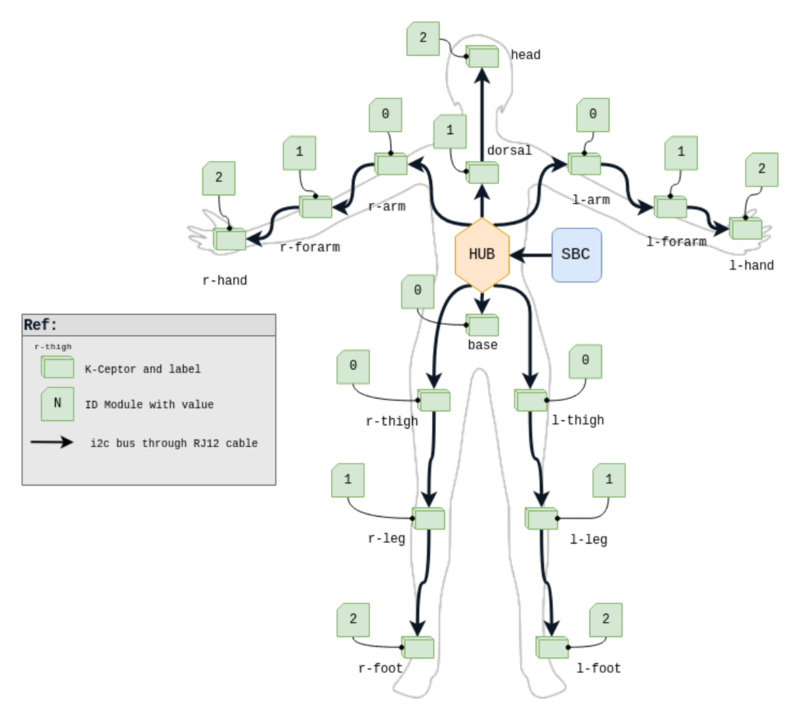 Two things has to be soldered on every ID module:

The resistors on R5(RLT) and R6(RLB) can be soldered directly to the K-Ceptor. They are chosen according to this table:

To better understand its functionality let’s quicky review how the address translator on the K-Ceptor gets its translation value.

Whenever the LTC4316 detects a rising edge on its ENABLE pin, it reads the voltage on the XORH and XORL pins and uses those values to set the upper and lower part of the translation byte according to the table above.