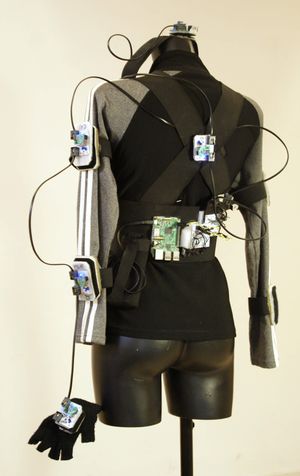 Part of a basic fixing system for the torso, made with elastic straps and velcro

For the system to work, the sensors should be firmly attached to the performers body.

This might seem like one of the less complicated parts of the building, and in some sense it is: you don’t need specific equipment or knowledge to make a basic fixing gear, with some glue and a number of straps you can make it work. On the other hand, the quality of the attachments will greatly influence the quality of the capture. Going beyond the lousy-glued-straps method to something more reliable requires a considerable effort, and the appliance of knowledge and tools from a discipline that is out of scope of most hackers: sewing.

There is not a definitive way to fix the sensors, instead creativity and common sense should be applied to create your own fixing system. If you find a good solution please share it with the community through our forum

The sensor and the bones[edit]

Before we start describing how the suit might be created, let’s quickly recap what’s happening inside the system:

What the main program (notochord) will be gathering from the sensors is information about its movements and attitude. That data is used to determine the absolute orientation of the sensor and, at the same time, of the part of the body to which such sensor has been attached to. In the computer, on the other hand, we are working with a synthetic representation of the human body, in which every part is represented with something similar to a 3D straight segment.

Theoretically speaking, during the capture each sensor should be completely fixed to that synthetic 3D representation of each body part. In practice that’s impossible. Our bodies are all but straight and rigid, in the best cases there are several layers of flesh and skin between the bone that is meant to be captured and the actual sensors. In other cases, the virtual bone doesn’t even have a real world counterpart. Are you starting to get the inherent problematic when designing a fixing system?

To make the long story short: we should do our best effort to tightly fix the sensor to the body part. To achieve this there’s no system that works better than any other. Depending on each use case, some ways might result easier and more comfortable than others.

Fixing sensors on the performer’s body[edit]

We say that the perfect attachment system:

What we did until now[edit]

We can’t say that we’ve reached all of those characteristics with any of our prototypes. On the early attempts, we relied on a lot of the fabric fastener commonly known as "velcro". First glued to the sensors, and to some straps that were fixed to the body, then we added a layer of foam between the velcro and the sensors and between the velcro and the body. This last step somehow helped adapting the straps to the curves of the body, but that kind of approach can’t be pushed much further. Velcro doesn’t seem to be that bad, as those rigs worked and the material was certainly cheap and easy to find, but the fixing is not perfect, and once is glued to the sensors you can’t easily take it off. 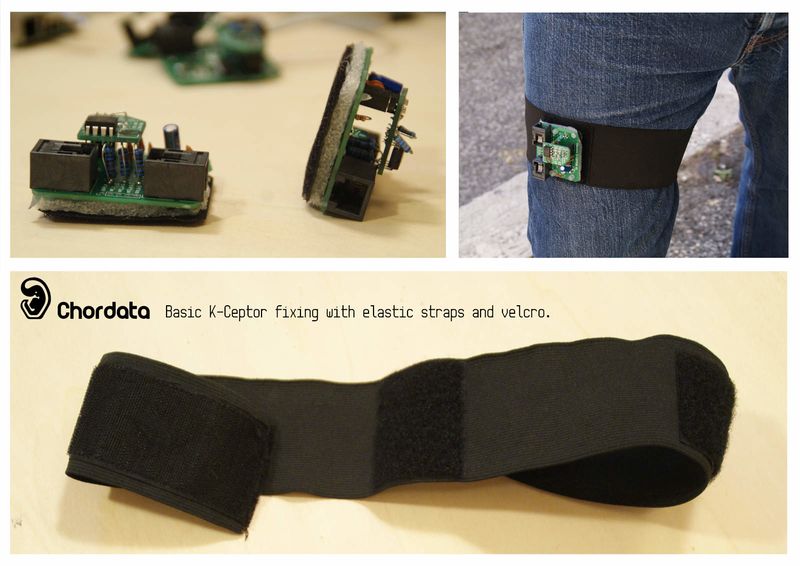 As said, velcro is not that bad after all. In order to prevent the problems associated with applying glue directly to the PCB as we did in previous versions. It is advisable to glue the velcro to another layer of material, and fix it to the K-Ceptor with screws.

That secondary layer could be made of wood or plastic. Perhaps laser cuted or 3D-printed.

We used some old K-Ceptor PCBs just because we have lots of them. But, since they have exposed metal parts, the legs of the THT parts underneath the K-Ceptor might generate short-circuits. That's why we added a thin layer of foam in the middle. If you go for this method and the material for the bottom layer is not conductive you can omit the foam. 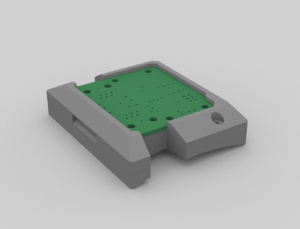 We have developed a plastic socket, that can be 3D printed. The sensor gets fixed to the socket and then secured with screws. The socket is then fixed to the body with straps.

You can download the STL and Blend file at our website. The socket is composed of 3 parts that should be printed separately.

Our experiences with this socket were not really good. It turned out to be a hard to manufacture part, which didn't solve most of the problems the previous system had. We leave it here as a reference for possible further development