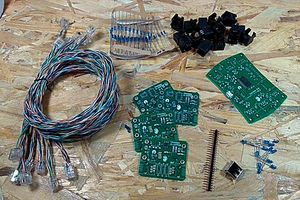 Parts from a beta-testing DIY kit
ATTENTION! this guides refer to the 1st Chordata beta testing program. If you are part of the second edition of the betatesting program (kits delivered in feb 2020) take a look here

If you are one of few persons in the world to receive a Chordata DIY kit during this, the first beta-testing experience, you will find yourself with a bunch of boards and components like the ones on the picture, and you might ask yourself "Well... how did I get here?",

And, more important: how can I turn this things into a working mocap suit?. You can find information on how to setup the system on the User Manual, while the intention of this guide is to make the process of building the suit starting from the DIY kit easier. Apart from the soldering, beta-testers (specially during the early stages of the program) will have to deal with the bare bones of the Chordata software in it's unfinished state. We have also collected here some explanations or advices that will help go through the process of orchestrating the framework by hand.

Beside, since during the early stages of the betatesting the Chordata framework still lacks the utility tools that will allow for

This guide is built upon the doubts or problems of others before you. If you have some issue that's not covered here, please ask in the forum.

Our mistake. We put the simbol for the led backwards on the design of the PCB. It will be fixed for the next revision.

Well, the idea is to include the RGB led in the future, and there is a placeholder footprint on the Hub, but it is not implemented on the software side yet.

The ones we are sending you already include the resistors to assign a translation value which can be 0, 1 or 2.
In order to capture a default byped configuration you should arrange them like the image here.

The led on the Hub is not turning on[edit]

Since they are conceived to recharge batteries, some of them might interrupt the power supply when the withdrew current is negligible (and that would be the case for the Hub, with just a led and the Mux in idle state). You can try as a test using a 5V wall-wart with an USB output instead.

Please connect the wall-wart to the Hub, unplug RPi and KCs, and use a tester to measure the voltage at:

The testpoint TP7 can be used as a reference to Ground.

The Notochord gives me an error[edit]

How can I transfer files from/to the SBC?[edit]

You can use a free FTP program, in this example: Filezilla. 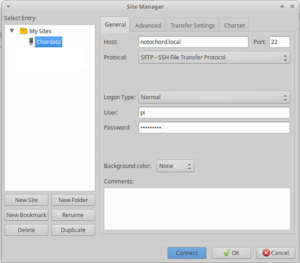 Now you can drag and drop files to and from your SBC using the Local site and Remote site panels.

I'm a bit confused about the XML files[edit]

This is indeed one of the trickiest parts of the process, specially if you don't have a programming background. The handling of this files is not supposed to be done by hand, at least not by the regular user. The plan is to have them completely hidden on the first production version of the system. But, until the Utility software is finished, and the Blender_add-on is improved you will have to edit them once in a while.

On the Armature parsing page you can find a brief technical explanation of how the configuration file works. But let's put it in another way here:

On start-up the Notochord has to read an XML file which should contain the configuration details, and a description of the Hierarchy.

By default it will read a file called Chordata.xml, but you can also tell the Notochord to read another file. This is done with the -c flag.

If there are no errors with the way the file is structured, the Notochord will begin it's execution trying to read the hardware devices described there.

Which file should I use for calibration? which for capturing?[edit]

With the current version of the notochord (0.1.1b) there's no need to create a special xml for the calibration, see User_Manual/4._Sensor_calibration#Run_the_software this section. The notochord will scan the bus and proceed with the calibration of the first sensor it finds. So you should connect just one at the time.

How can I edit these files?[edit]

You can do it with a regular text editor on your PC and then transfer them to the SBC.

Or the editing can be done directly on the SBC's terminal environment using the command-line editor GNU Nano which usually comes installed by default. Use nano somefile.xml to edit a file, and keyboard shortcuts like Ctrl + X to exit.

There are other command-line editors like Vim or Emacs, but unless you want to dedicate some time to learn how to use them just stick with Nano.

Still can't get what this "Hierarchy" is[edit]

All the hardware attached to the SBC, described on the same way that they are connected physically.